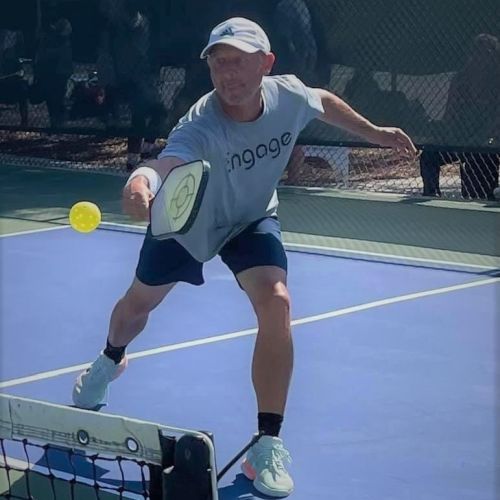 Bob White is a professional pickleball player sponsored by Engage and ranked in the top 25 in the world for senior pro players. Being a passionate player and experienced instructor allows Bob to bring a well-rounded knowledge to the court whether he’s competing or instructing.  His love for people and the game of pickleball merge together in a perfect unison, creating a high energy, easily understandable clinic or specialized one-on-one lesson to meet your individualized goals.

Bob has been immersed in the world of sports since a youth. Throughout the years, he has remained a competitive athlete in several sports, served as an impartial referee, organized and ran sports camps, and served as coach and instructor. The last five years, however, he has centralized on competing and coaching in one of the fastest growing sports in the US, Pickleball. His love for the game was immediate and all-in. His spark quickly grew into a fire, and he spread it through the world of teaching.  Bob instructs a wide variety of players in vast settings, including clinics, camps, groups and individuals.

Bob’s fire for competition still burns brightly as he continues to play in men’s doubles and mixed doubles. Bob has won or finished in top three in many tournaments over the last five years and continues to compete in the Senior Pro division. Bob’s fuel to compete is contagious and transferred through his lessons which allows his students and players to ignite their game and reach that desired playing goal.