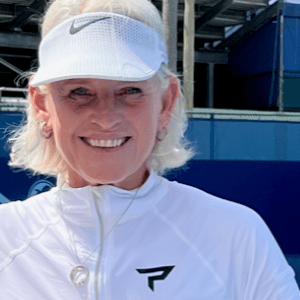 Chris Powers is a four-time Nationals Gold medal champion as well as a three-time silver medalist.  She competes around the country at the Super Senior Pro level in the Mixed Doubles and Womens Doubles categories.  She has competed in over 80 tournaments including Nationals in Indian Wells, CA, and the U.S. Open in Naples, FL.  She has won over 200 medals in the four years she has competed.

Chris resides in Aiken, SC with her four horses, three dogs, and two pickleball courts.  She conducts lessons and camps at her farm called Two Sisters Farm.  She enjoys teaching and her students range from complete beginners to those who play competitively.  Chris also runs free pickleball retreats for women diagnosed with any type of cancer through her organization, Women Beyond Cancer.