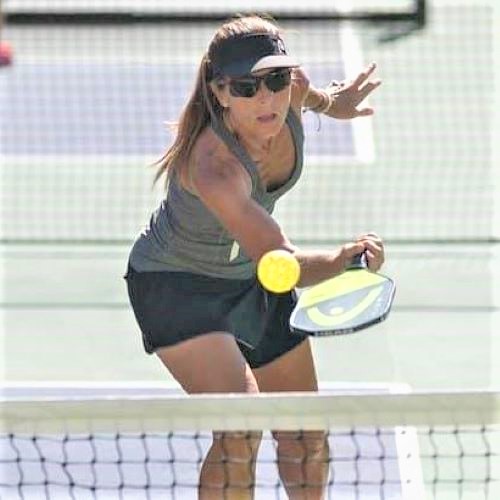 Christine Barksdale is an established and highly recognized Pickleball pro who has medaled in many prestigious Pickleball events. In her youth, she played tennis and developed into a competitive 4.5-5.0 tennis player.  She became a USTA National Champion in 2010.

She started playing recreational Pickleball in 2009 when her father introduced her to the game while Christine was visiting him at the Voyager RV Resort in Tucson, AZ.  After her introduction to Pickleball, Christine decided to find local places to play and met her early instructors, Mike Wolfe, Hunter Duval, and Enrique Ruiz.  After playing with Enrique Ruiz, he called Christine and invited her to play in a tournament.

Christine has had lots of success on and off the court. Besides medaling on the court, she was the  USAPA’s Director of Competition and Athlete services and HEAD’s National Promotions Manager for Pickleball. During the Margaritaville USA Pickleball Nationals, which was co-hosted with Murphy and Luke Jensen, Christine was the on-court announcer during the pickleball exhibition with Andy Roddick and Andre Agassi.  She continues her Pickleball journey by regularly competing in tournaments and instructing players.

Scroll To Top
We use cookies to ensure that we give you the best experience on our website. If you continue to use this site we will assume that you are happy with it.Ok