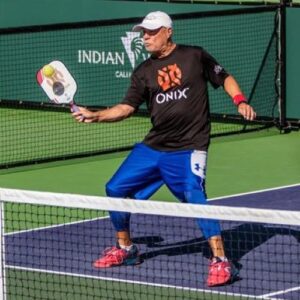 Steve Cole is the Head Pro Instructor at the Plaza Hotel and Casino in Las Vegas, NV where he has instructed over 3,500 students.  He has been a Senior Pro since 2016 and in 2018 he became an IPTPA Certified Instructor.

After back surgery, Steve was looking for a low-impact sport. With his background in racquetball, table tennis, and basketball, and some convincing by his wife, who was already playing pickleball, Steve began playing Pickleball.  He developed a keen liking for the sport and has won over seventy (70) 5.0 Pro Event Tournaments.

With his teaching style, Steve provides a better understanding of being a consistent player through proper technique and best strategies. Steve’s goal is to take students to the next level.  Steve is an Onix sponsored Pro Player and plays with an ONIX Evoke Pro paddle.